Well, I was very cheeky the other day and gave you a tantalising peak of my first ever finished quilt. 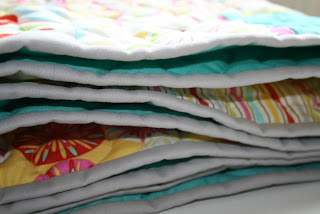 This quilt started life back in May when I was talking to a friend who's niece was turning 21: a landmark birthday that she wanted to give a memorable gift for. We started talking about cushions and then I mentioned quilts (I was still flush from having done my jelly roll quilt top which I still haven't finished binding. Ahem!). A week later a beautiful bundle of 10 FQs arrived at my door and the clock started ticking!!! 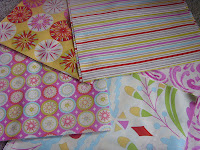 I had decided on a disappearing 9-patch block and whilst browsing the web I came across an idea of using a solid colour for the centre square. I bought a selection of plain colours picking out the main ones in the fabric and then cut all my fabrics into 10" squares. They were then pieced together, meaning that once each mega-black was cut into four I was left with a finished block of around 14.5". The quilt top was made with a total of 36 x 10" squares arranged in a 4x4 block pattern, with the squares alternated to create a random pattern. As a quilting novice I'd definitely recommend this block, I found it good fun and relatively quick to make. And I think the finished effect looks more complicated than it is in practice?

The back proved a bit trickier - I wanted to use some of the pretty top fabrics that I had left over and my backing fabric wasn't quite wide enough so I eventually decided on a stack'n'whack block panel using a block of each fabric for the centre and a different solid for the outer. The centre panels were 9.5" (I'd mis-cut a couple of the blocks for the front which is why they're a bit smaller than the front) with the solid border taking the finished block upto 14.5".

And then it came to the quilting! I've only ever quilted the jelly-roll top so was a little nervous, especially as it was to be such a special present. My first thought was to quilt along the grid-lines of the top but I found it so difficult to marry up the front and back layers that after doing one line I realised it would look rubbish and out came the seam ripper. Sigh! Next up was to free-motion across the top. I'd always fancied trying this but hadn't really anticipated trying it on my first proper quilt!

I worked on the back of the quilt using ivory for the bobbin thread and then grey for the top thread across the stack'n'whack panel and sea-green top thread for the rest of the quilt.

The free-motion went quite well okay. Sometimes I would be sewing fluidly and then other times not so much - I found listening to loud rock music definitely helped!

This is the second quilt where I've had problems with the bottom fabric bunching up and having to rip out a lot of stitches. It took 1hr to do a quarter of the quilt and then 2hrs to unpick it. Not great, especially as I was working to a deadline! I'm guessing it's because I'm using a normal sewing foot instead of a walking foot and not basting enough? I only had normal pins and I have a feeling I didn't use enough of them. I've now got curved ones which I'm hoping will help out next time. Although if anyone has any tips for me they'd be gratefully recieved!

Overall, I think it's come out well. If I look really close I can see that my stitch lengths aren't as uniform as they could be and that some of the free-motion is tighter in some areas than others but on the whole I'm really pleased with it. It helped once I got the tension right....I found that once I turned the dial up to 9 and used a medium-slow speed the stitch appearance significantly improved!!!

So, enough of the talking (well, writing!) would you like to see how it turned out?


In the bottom left corner, I sewed a personal message from my friend to her niece in free-machine embroidery on grey fabric and bound with some left over pink patterned fabric

I finished the quilt by hand, binding with grey fabric all around - the colours were so bright and colourful that I thought the grey was the best choice as it wouldn't create an over-dominance of any one colour and would also help to bring it all together. And I can't resist one more gratuitous shot of the free-motion embroidery!

I really need to practise photographing quilts - I'm going to have to get me some pretty hangers and bang a nail or two in the wall for next time I think! And yes, there will be a next time - although this quilt did bring me to the brink of frustration a few times I'm really happy with how it came out and am looking forward to learning new skills on my next one. In a little while that is!!!!

Todays sky ● grey, it's been raining on and off all day. Meh!